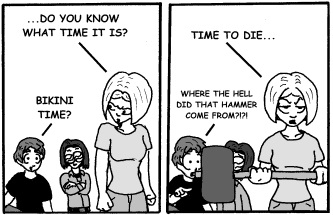 She can, indeed, touch this.
"If I hit you with a hammer which then disappears, you've still been hit with a hammer."
— Sam Simeon, Phil Foglio's Angel and the Ape
Advertisement:

When a cartoon character needs to inflict some Amusing Injuries on their foes, they can somehow pull a weapon of their choice from nowhere. Comically oversized hammers, anvils, and dynamite are common choices. The weapons (and the injuries they cause) then disappear as easily as they appeared, often as soon as they leave the screen.

Of these weapons, hammers are likely the most commonly used, to the point where the mysterious place they come from was named Hammerspace.

Sometimes, the character has an explicit ability to access Hammerspace, but the Hyperspace Mallet usually runs on pure Rule of Funny. In addition to using Hammerspace as a gag in its own right, it also lets animator or cartoonist create whatever Slapstick gag they want without worrying about what a character has on hand.

It's a Dead Horse Trope in the West, where it originated, but it's well alive in Anime and Manga. There, it commonly appears when a short-tempered schoolgirl enters Pervert Revenge Mode, and she attacks the source of her ire with a giant hammer or a Paper Fan of Doom. Modern Western examples are usually references to Anime or the original Western cartoon shorts.

This is a subtrope of Hammerspace where the retrieved object is used for Slapstick. Hammers which don't disappear when not in use, or which inflict non-Amusing Injuries, are at Drop the Hammer. Harsh Word Impact is for when the injuries are just a metaphor for emotional impact.