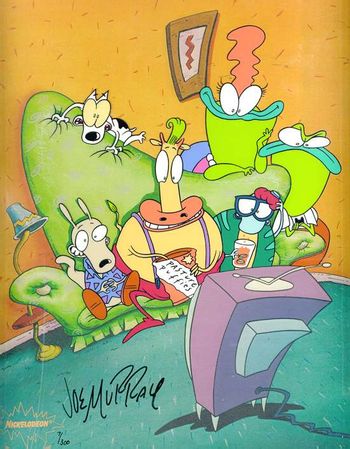 One of Nickelodeon's most famous Nicktoons, and the 4th overall, created by illustrator and cartoonist Joe Murray. It stars Rocko, a mild-mannered young wallaby from Australia, adjusting to life on his own in the hectic metropolis of O-Town.

Most of Rocko's days were "very dangerous days", in which A Simple Plan like a trip to the laundromat or just trying to keep his job was met with bad luck and other weirdness. In later episodes, Rocko's friends Heffer — a gluttonous, not-too-bright, but amiable bovine who was literally Raised by Wolves — and Filburt — a neurotic, hypochondriac turtle — were often dragged along for the ride. Rocko would also find himself butting heads with his cranky next door neighbors, middle-aged toad couple Ed and Bev Bighead.

The writers had an amazing talent for getting away with a lot of risqué material, making The Ren & Stimpy Show's attempts look amateur and obvious by comparison (although Ren & Stimpy focused more on shock value). At least two episodes, "Leap Frogs" and "Heff in a Handbasket," were banned after their original airings for their raunchier-than-normal content and certain episodes (i.e. "Road Rash", where Rocko and Heffer encounter a shady motel ran by a stereotypical Asian) had scenes that were cut from broadcast.

Shout! Factory released the complete series to DVD in 2013. While it includes the banned episodes, it also excludes several scenes from others ("Hut Sut Raw", "The Good, the Bad, and the Wallaby", "Road Rashed", and "Wacky Delly"), forcing completionist fans to seek them elsewhere.note This set was eventually re-released by Paramount in November 2018, but the contents were exactly the same as the last one, including the censored scenes.

Now has its own Best Episode Crowner!

The Rocko's Modern Life episode, "Zanzibar" has "The Recycle Song", a Spelling Song about recycling sung by Captain Compost Heap, which inspires the citizens of O-Town to recycle their garbage to keep the Earth clean.

The Rocko's Modern Life episode, "Zanzibar" has "The Recycle Song", a Spelling Song about recycling sung by Captain Compost Heap, which inspires the citizens of O-Town to recycle their garbage to keep the Earth clean.