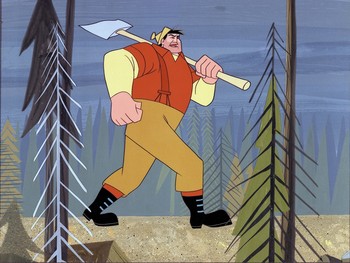 It is, obviously, an adaptation of the myth of Paul Bunyan.note Or rather an adaptation of an advertising campaign, as most everything associated with the Paul Bunyan "myth" was invented as marketing for a logging company. A gigantic cradle washes up on the shore of a coastal town in Maine, bearing an enormous baby whom the townsfolk adopt and christen "Paul Bunyan". Paul grows up to be a child of staggering size, so huge that he lifts off the roof of the schoolhouse when he wants to answer a question from the teacher.

Grown so tall that his head sometimes pokes above clouds, Paul heads west, where there are trees to chop. He clears out the Dakotas and digs the Missouri River to float logs. He heads further west, only to have a confrontation with a city slicker carrying a steam-powered saw.