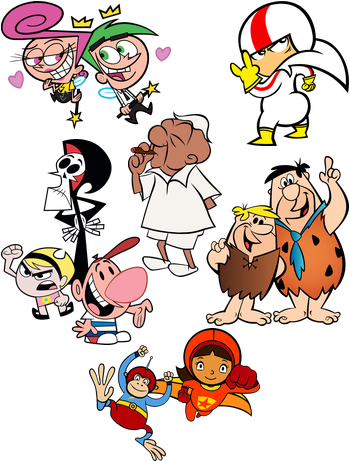 "Yes, I would like to place an order for cartoons. I'd like the art style... Extra thick!"note L-R, top to bottom: The Fairly OddParents, Kick Buttowski: Suburban Daredevil, The Grim Adventures of Billy & Mandy, Mr. Magoo, The Flintstones, WordGirl
Advertisement:

Animation style characterized by visible heavy black borders around characters and objects. This style began being used by a few animation companies in the early 1950s (mostly UPA, of Gerald McBoing-Boing and Mr. Magoo fame), and became dominant in American TV animation during the '60s and '70s, eclipsing the more naturalistic style used in most animation during earlier decades. It was phased out during the early '80s, when more naturalistic styles again became dominant in American animation, but then became the standard yet again (on television at least) during the late '90s, and so it remains to this day. Shows animated in Flash and Toon Boom tend to look good in this style.

This is sometimes considered to be among the most defining traits of modern day American animation, mostly when contrasted with the similar "anime=big eyes" notion to emphasize the differences between U.S. and Japanese animation. When this art style does show up in Japanese media, it tends to have uneven lines and crayon shading in imitation of children's doodles (rakugaki).