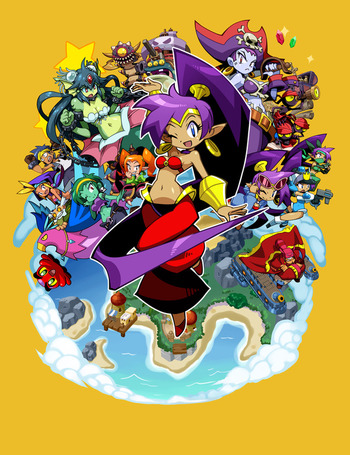 We will dance through the danger until the world is saved!
Can't stop me now, 'cause I'm Shantae!
Advertisement:

In far-off, magical Sequin Land lies a quiet port village by the name of Scuttle Town. It's a nice enough place, if it wasn't for its citizens constantly being under attack by vile pirates and countless other evils. Thankfully, like many other places in Sequin Land, Scuttle Town is host to its own guardian hero that can protect them in times of need. In their case? A cute, sassy purple-haired half-genie named Shantae whose arsenal of choice happens to be her Prehensile Hair and ability to magically belly-dance into various creatures.

An unabashedly quirky member of the Metroidvania genre, Shantae is a franchise created by Matt Bozon that began its life in 2002, at the extreme end of the Game Boy Color's lifespan. Upon the second game's release eight years later, the franchise slowly gained popularity as WayForward Technologies' flagship series. The titular character has since gone on to appear outside her own games as a playable character in other indie games such as Mutant Mudds Super Challenge, Runbow, Blaster Master Zero, Hyper Light Drifter, and Indivisible. In Nintendo's Super Smash Bros. Ultimate, Shantae and her main nemesis Risky Boots represent the franchise as Spirits; the former also got a Mii Brawler costume based on her, which is included as DLC alongside the track "Neo Burning Town" from Half-Genie Hero.