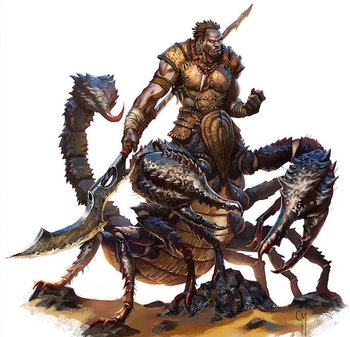 "Things get more imaginative later, though. This time, for example, you fight a topless lady with a scorpion for an arse! Push that motherfucking boat out!"
— Yahtzee Croshaw, Zero Punctuation review

Scorpion people are chimeric beings combining the physical characteristics of scorpions and of humanoids. They almost always have segmented tails tipped with poisonous stingers, since it's the signature physical feature of a scorpion; they're often also poisonous in general, and some have claws while others do not — if they do, these can either replace their hands or, if the scorpion person is centaurine in shape, be attached to their waists, where the scorpion's mouth would be if it weren't attached to a human body.

Scorpion people have been around for quite a long time — centaur-like scorpion people first appear in Sumerian and Babylonian myths, under the names of aqrabuamelu or girtablilu, as powerful guardians of places the gods don't want humans poking around in. (So they’re definitely a Mesopotamian Monstrosity, but maybe on the side of law if not goodness.) Many modern works use this as inspiration and depict them as guardians of holy sites in desert settings. These scorpion centaurs are the likeliest to be called girtablilu.

Scorpion People can also appear as a more exotic or threatening alternative to Spider People. In general, scorpions are perceived in fiction as an Unpleasant Animal Counterpart to spiders: while heroic or benevolent spiders are far from unheard of, scorpions are much more universally portrayed as aggressive or outright evil — Scary Scorpions sees far fewer inversions than Spiders Are Scary. Further, scorpions are often perceived and portrayed as more dangerous or powerful than spiders typically are. Thus, in much the same way that scorpions are sometimes used when something more dangerous or intimidating than spiders is needed, scorpion-based humanoids can serve as a more threatening or dangerous replacement for Spider People, and are more likely to be portrayed as aggressive or simply antisocial. This disparity may owe itself to the real-life fact that scorpion stings tend to be more painful and dangerous than spider bites.

Regardless of how they're used, they appear most often in desert-themed settings, usually ones inspired by the deserts of North Africa and the Middle East or by Ancient Egypt.

Overlaps with Our Centaurs Are Different when the scorpion person specifically has a human torso on a scorpion's body. Compare Big Creepy-Crawlies, which are nonhumanoid giant arthropods.

The wife of Manscorpion Tark, a fragile soul created long ago by an ancient being in the throes of madness. Najka herself has succumbed to the very affliction which felled her master and has devolved into a ferocious beast, a threat to all living things.

The wife of Manscorpion Tark, a fragile soul created long ago by an ancient being in the throes of madness. Najka herself has succumbed to the very affliction which felled her master and has devolved into a ferocious beast, a threat to all living things.