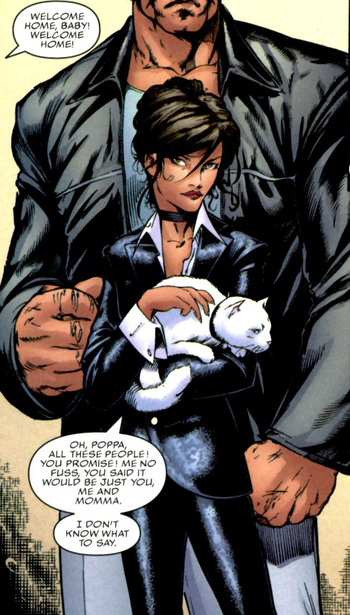 If you have an animal sidekick, you're a princess.
If you have a Right-Hand Cat, you're an evil princess.
"Oh, my Ada. The only princess of the royal family of the kingdom of Small Heath."
— Freddie Thorne about Ada Shelby, Peaky Blinders
Advertisement:

A girl's boyfriend or father just lavishes love, attention, and gifts on her. Especially gifts. Jewelry, dresses, fur coats, vacations, and it all seems to come from… um, wait, hold on a second. Where does he afford that? He claims to have a job that puts him in a tax bracket way too low to afford all this.

If she brings up her suspicions to her father or boyfriend, of course he's going to deny this. He'll even twist her words to make her look wrong for even bringing that up. A Spoiled Brat may ignore it completely, The Baroness or a Dragon Lady may join up readily, while a Spoiled Sweet girl may end up just getting on with her life and making it clear she doesn't want in on the family business — though it's never that easy.

This is the life of a Mafia Princess, with varying degrees of Truth in Television. Some girls join in the family business without qualms, some are aware of the business but not really involved in it; some are actually kept out of the loop entirely, with the parent refusing to allow their child to throw their lives away like the parent did. One of the ways not everything is better with princesses and a common characterization of women pertaining to The Mafia.

If the story is from a heroic point of view, the hero will fall in love with a mafioso's girlfriend or daughter. Both of them could be in danger of their lives. In more idealistic stories, the scary mobsters make an exception from scariness for her. If they like her father, they love and cherish her, pamper her, and protect her with their lives. Their behavior might be interpreted as them seeing her as a symbol of innocence and gentle emotions, all the things these hardened criminals have lost. Additionally, the Boss probably wouldn't be happy if something happened that they could've prevented. Plus he might genuinely not want her to get involved in this world, since Evil Parents Want Good Kids. Either that or he may be actively grooming her to take over his operations. In extreme cases, she may even covet Daddy's position and arrange for him to suffer an "accident" so that she can take over the mob for herself. If she succeeds in taking over, she may become The Queenpin.

The Japanese variant of this trope is the Yakuza princess; the female heir (or the daughter of the current heir) of a Yakuza clan who is both fully aware of the nature of the family enterprise and is often fully supportive of it. Also a common characterization for Yakuza leaders' consort (known as ane), with the addition of being way more involved in the organization's activities.

A woman working for The Mafia or willfully partaking in their activities isn't a Mafia Princess, even though she may have been one in the past. The daughter of a rank and file mafioso (Soldato or even most Capos for example) is usually not considered a Mafia princess.

Compare The Don, Daddy's Little Villain, Dark Mistress. May become The Queenpin if she's The Don's heir or widow.