Film / A Most Violent Year 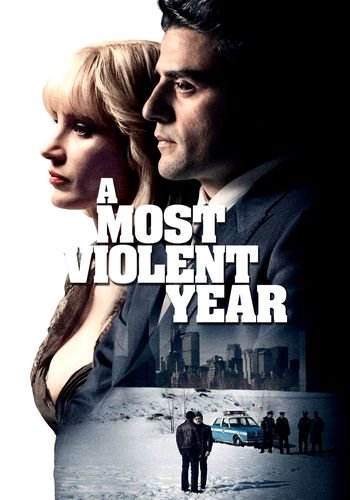 The result is never in question, just the path you take to get there.
Anna: My husband is not my father. Not even close. So if I were you, I would start treating us with a little more respect or I guarantee he will make it his mission in life to ruin you. This was very disrespectful.
Advertisement:

A Most Violent Year is a 2014 American crime drama, directed by J.C. Chandor.

The year is 1981, already one of the most violent on record in New York City history. Relative to the abundance of murders, rapes, and robberies taking place in the city every day, the problems facing up-and-coming businessman Abel Morales (Oscar Isaac) seem relatively minor — his company is growing steadily and he's negotiating a difficult deal for an oil terminal that will allow him to expand his business considerably. But when an unknown competitor starts hijacking his trucks at gunpoint, making off with thousands of dollars worth of oil, his problems get considerably bigger. Abel struggles to keep his business afloat in the face of legal troubles and an increasing number of hijackings, as the head of the NYC Teamsters pressures him to arm his fleet of drivers, and his wife Anna (Jessica Chastain) grapples with her concerns for her family and her future.