If You Kill Him, You Will Be Just Like Him! 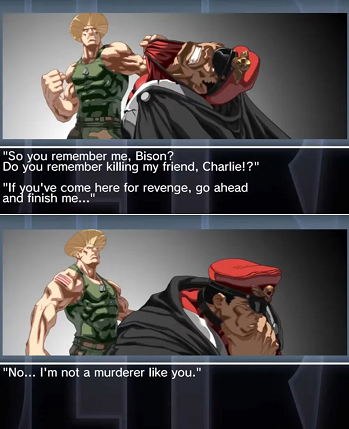 Clayton: Go ahead, shoot me. Be a man.
(Tarzan presses the barrels right to Clayton's throat... and mimics the sound of a loud gunshot.)
Tarzan: Not a man like YOU! (breaks the gun)
— Tarzan
Advertisement:

The hero has finally subdued the hordes of evil, thwarted the Evil Plan, and subdued the Big Bad in one final showdown. However, the villain couldn't make things simple and die in battle. Now he's helpless at the hero's feet, and… the hero stops. Maybe he throws away his weapon and says, "I'm not like you." Maybe he was about to kill, but his companion shouts something like, "You're better than him!" Maybe the villain taunts them about being not so different. Either way, he refuses to kill.

This trope is grounded on the basis that the act of killing is always wrong, no matter who it is directed against or how well-deserved, or even if it is done with the hope of preventing more evil in the future. This can come across as slightly disingenuous if the hero has slaughtered his way through dozens of faceless mooks just to reach the villain, only to hesitate or spare him at the end because "killing is wrong." In such a scenario, only Character Development can make the disparity make sense. From a Doylist perspective, it is also a common justification for maintaining a villain's Joker Immunity.

Equally disingenuous is the villain trying to pull this on the hero (If You Kill, You Will Be Just Like Me), drawing a moral equivalency between the people he has killed to achieve his ends, and the minions the hero has killed trying to stop him. True, they've both killed, but most people understand the difference between killing for power or wealth and killing in self-defense.

Naturally, with all these difficulties with the trope, some writers find a way to make this argument seem plausible, namely by showing that the villain is similar to the hero by virtue of being a Shadow Archetype. The villain and the hero have a similar past until partaking a morally questionable act put them on the path of becoming a Fallen Hero or Well-Intentioned Extremist, providing evidence the hero is at risk of eventually becoming just like the villain if they take the role of executioner.

If a villain clearly deserves death, he may become a self-disposing villain, suffer a Disney Villain Death, be killed by his own men (often henchmen he abused in the past), another evil character, or by the hero's Token Evil Teammate. This way the villain is dead, and the hero gets to walk away scot-free and blameless for the deed.

With this trope in play, killing is treated as a special kind of evil. Even things like eternal imprisonment or horrible maiming are treated as more moral than a quick death. Anything really, just so long as the hero doesn't kill. A Technical Pacifist is likely to go along these lines. Revenge Is Not Justice is always invoked in these topics.

In rare cases, someone will agree that killing the villain will make them no better than them and still kill them, either because they feel that revenge is too sweet to pass up or they're cynical enough to believe that they have to go down to the level of villains to stop them.

It's common to see this in Crime Drama shows where the police have cornered the killer-of-the-week, and a would-be victim/relative of a victim has the killer at gunpoint, ready to kill them; generally, the police officers will opt to use this line in an emotional speech in order to get them to stand down so they can arrest the killer. If they choose to kill, then it's a show of Vigilante Injustice.

Contrast with Kill Him Already!. Compare with Save the Villain and Sword over Head. Anti Heroes are exempt. Compare/Contrast Strike Me Down with All of Your Hatred!. When this is played literally or when it leads to a Full-Circle Revolution, it can be a case of You Kill It, You Bought It. Often What Measure Is a Mook? gets involved as these dilemmas arise when important baddies are at the heroes mercy but rarely do such sentiments pop up when they are mowing down waves of faceless goonsnote And more often than not the story will play out in a way so that mooks never surrender or are incapacitated.

A subtrope of He Who Fights Monsters and Moral Dilemma. See If You Taunt Him, You Will Be Just Like Him for when the stakes involved in this situation are lower.

Emperor Palpatine tries to goad Luke into killing and replacing his father.

Emperor Palpatine tries to goad Luke into killing and replacing his father.