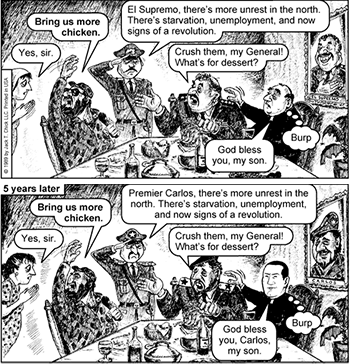 The first and last panels from "Fat Cats"

It's not called a revolution for nothing.

This trope refers to when a revolution loses revolutionary zeal and appears to just repeat the pre-revolution business as usual, via self-motivated corruption and bureaucratic inertia. Names and rhetoric change, the injustices stay the same.

This has happened quite often, and for just the same reason that the phrase "The Revolution has been betrayed!" is such a cliché: egalitarian rhetoric is well and good, especially among those outside the establishment, but once an erstwhile egalitarian gets a taste of real power and discovers how sweet it is, they tend to get very willing very fast to remove, "by any means necessary", whatever obstacles stand between them and that power. This occurring not in a vacuum, but in competition with other revolutionaries who are making the same discovery at about the same time, the result generally is a multi-cornered dogfight in which the most ruthless bastard is extremely likely to be the last left standing — which tends to have unfortunate consequences for the masses, from whom said bastard will have risen, and which might just elevate someone else to supplant them unless they ensure their loyalty.

One can argue that this trope generally applies if you take a surface-view of revolutions, i.e. the political layer of an autocratic system of government replaced with a more moderate/liberal/equal kind. Actual revolutions tend to be complex affairs and unleash changes across multiple layers of society and culture, and in addition to direct effects, there are also indirect effects, such as the threat of a radical revolution making reactionaries accede to moderate demands they formerly abhorred. So while revolutions historically and in fiction do feature shocking and depressing reversals it isn't necessarily the case that nothing changes either. On a less ideological note, this often happens because of a clash about what to revolutionize — do you want to alter an obsolete system of government and change the economy so that it favors the poor over the wealthy and privilege this over all other issues (Russia, communist revolutions generally)? Establish representative democracy while leaving socio-economic issues as a bridge to cross on another day (America)? Or do both at the same time (France)? Or, in the case of pro-independence and anti-colonial revolutions, simply kick the Occupiers Out of Our Country and promote self-determination (India, Algeria, Egypt)? But it can also be removing from power those who prospered under the colonial regime, even if they were strictly limited in the positions they had held.

Ultimately, revolutions become civilized or uncivilized, based on clarity of immediate short-term interests, and they become violent when one, two, or five factions clash on who's left and who's more right on a given issue and how pressing said issue is with the people.

Compare Reign of Terror; that, in fact, can naturally lead to this. Bloodbaths tend to make people lose fervor even when, in the case of the Terror, the bloodbath was demanded and enabled by popular fervor to start with.

See also Meet the New Boss, for when the new villain doesn't even bother pretending to be any better than the one they’ve just deposed. Sometimes the trope plays like a large-scale version of He Who Fights Monsters and/or Be Careful What You Wish For. For when the revolution was intended to place a new tyrant on the throne from the start, see Staged Populist Uprising. Revolving Door Revolution is when the new government is deposed by another, which is deposed by another ad nauseam. The Horseshoe Effect is when two individuals or organizations claim to be ideological opponents, but in fact have a great many beliefs in common, and can be an underlying cause of this trope.

This trope has very strong Real Life connotations. Famous mathematician and physician Pierre-Simon de Laplace, who lived through The French Revolution, coined the term parabola of Revolution: it began with the reign of the Bourbons, ascended like a parabola through constitutional monarchy, republic, reign of terror and pinnacled at Napoleon's empire; then it descended again through military defeats, restoration of the Bourbons, the 100 days' empire and Waterloo, and descended back to the reign of the Bourbons, just like a parabolic arc. In the ensuing decades, the arc would again shift, until finally settling into a republic.

For Real Life examples, full-circle revolutions have to be at least 50 years after a regime's leader leaves office (including dying while in office).

Hilariously done in seconds with the Pakleds when they overthrow the Big Hat government, proclaim an end to Big Hat Rule, and then immediately put on their hats and declare themselves the rulers.

Alternative Title(s): The Thermidor, The Revolution Changed Nothing

Hilariously done in seconds with the Pakleds when they overthrow the Big Hat government, proclaim an end to Big Hat Rule, and then immediately put on their hats and declare themselves the rulers.