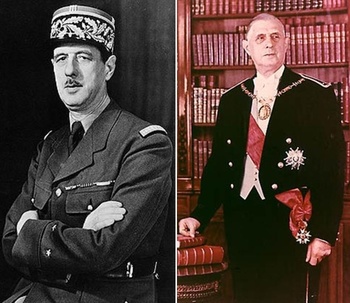 Left: De Gaulle le général (1942); right, de Gaulle le président (1958)
"Regrettably, Gaullism and Bonapartism have a number of features in common, but Napoleon and de Gaulle do not have the same moral value... The first wanted a Holy French Empire without the faith, a Europe under French occupation. The second wanted to rescue the nation from the emperors and establish a free France in a free Europe."
—Régis Debray
Advertisement:

Charles André Joseph Marie de Gaulle (22 November 1890 – 9 November 1970) was a French military officer, politician and man of state, who fought with distinction during World War I, later becoming the leader of the Free French Forces after the fall of France in 1940 during the early stages of World War II. After the Liberation of the country with the help of the Allies, he led the French Provisional Government from 1944 until 1945, later becoming the first President of the Fifth Republic, from 1958 until 1969. He is a strong contender at being the most influential French political figure of the 20th century, and his legacy continues to shape the nation's politics to this very day.

An élève de Saint-Cyr, de Gaulle was educated as an officer in France's most prestigious military academy. Commanding a platoon as a lieutenant, he fought in some of the earliest battles of World War I, sustaining numerous injuries while earning praise for his bravery and unconventional tactics. He was eventually captured during the Battle of Verdun, spending the remainder of the war in German captivity and even sharing a cell with Mikhail Tukhachevsky (then an Imperial Russian Army lieutenant). Between the World Wars, both men became leading advocates of mechanization and German-style maneuver warfare (Bewegungskrieg), opposing the prevailing Entente Cordiale-style doctrine of firepower and positional warfare.

At the outbreak of World War II, de Gaulle initially served as a colonel; he was eventually appointed to lead a hastily-formed armored division after the Wehrmacht's breakthrough at Sedan. His limited success at countering German advances promoted him to the rank of acting brigadier-general. Nevertheless, it was all too little, too late, and France was forced to sign an armistice with Germany on June 22, 1940. By then, de Gaulle (along with a few other officers who opposed the surrender) had fled to England. De Gaulle was one of the handful of people who saw any point in what was largely symbolic resistance at the time. Few people saw the point in fighting on once Paris had fallen — Marshall Philippe Pétain's coup had a lot of popular support, and unlike Great Britain, France had limited capacity to wage war outside of the European continent.

On June 18, 1940, the BBC broadcast a speech by de Gaulle (l'Appel du 18 juin / the Appeal of 18 June) urging the French people to continue resisting the Germans. Although it had limited impact at the time, the speech cemented him as the leader of the Free French Forces, which grew over time to become a significant military force in its own right. This, along with Winston Churchill's determination to avoid being isolated between Franklin D. Roosevelt and Josef Stalin during negotiations, effectively made him the de facto Allied leader of France. He would eventually assume such a role in the Provisional French Government, following the liberation of France during the advance of the Allies in 1944, vigorously opposing the attempts to enforce the Allied Military Government for Occupied Territories (AMGOT) in the country.

After the war, de Gaulle spent about a decade out of the spotlight. He was later elected as the first President of the French Fifth Republic during the Algerian War for his apparently firm and rock-like determination to retain Algeria as a French possession. It turned out that he wasn't firm and rock-like the way his supporters wanted, as he ultimately granted Algeria its independence. This led to several assassination attempts on his life by the Organisation de l'armée secrète (OAS), a far-right paramilitary organization mainly comprised of veterans and others who opposed Algerian independence.

Internationally, de Gaulle was often stereotyped as an arrogant jackass for his apparently stubborn and self-important behavior, although it could be argued that his actions were more or less following the Realpolitik of the time. As he himself said, "France has no friends, only interests", and this helped restore French international prestige and independence in foreign policy, counterbalancing the influence of the Anglo-American partnership and the Soviet Union in European politics.

Under his tenure, France became a nuclear power and was withdrawn from the NATO command structure (while still remaining part of the alliance). When the United Kingdom decided that it would quite like to join the European Economic Community (forerunner of the European Union), having initially not wanted to, De Gaulle publicly vetoed them. He argued that the UK's interests diverged too much from those of other European nations, and debate still goes on as to whether he really thought this, or whether he just wanted to defend French economic interests. He also opposed the United States' intervention in The Vietnam War. Canadians remember him best for his infamous "Vive le Québec libre!" comment at Expo 67 in Montreal, which represented a breach in diplomatic protocol, emboldened Quebec separatists, and pissed off English Canadians (and Quebec federalists) no end.note The hypocrisy of this was highlighted when de Gaulle himself got huffy over comments from then Canadian Justice Minister and future Prime Minister Pierre Trudeau—a francophone Québécois federalist—asking how de Gaulle would have liked it if the Canadian PM went to France and proclaimed "Brittany for the Bretons!" It's also clear that while theoretically this was justified by realpolitik (as an independent Québec would likely support France in intra-Western Bloc squabbles), it was also a horrendous miscalculation on de Gaulle's part, since it not only alienated Canada but also offended Britain (since the Quebec separatists would also probably ditch the monarchy) and annoyed the United States (for getting involved in internal North American affairs, which the U.S. regarded as their backyard). He also was quick to put France and (West) Germany on the road to reconciliation and cooperation, as formalized in the Elysée friendship treaty of 1963, signed by him and West German Chancellor Konrad Adenauer. De Gaulle also famously pissed off Israel during and after the Six-Day War, by withdrawing French support.

He also planted the seeds for French domination of European space interests when, in 1965, he moved the country's rocket base from Algeria to French Guiana, a part of France that greatly supported him in the Free France era. This created the Guiana Space Centre, now the primary spaceport of the European Space Agency.

Despite his charisma and popularity, he was increasingly being seen as authoritarian and was considered too conservative for the France of The '60s. To young students, de Gaulle — who spent much of his life opposing conventional practice and authority — was the symbol of everything that was old, conservative and out-dated. He managed to survive the May 1968 protests and riots by calling a snap election where his party won a crushing majority, but quit after being overwhelmingly defeated in a referendum on reforming the Senate and administrative divisions. None of the following presidents has ever done this after electoral defeats during their mandates. He died at the age of 79 on November 9, 1970, a few months after his resignation.

De Gaulle is still seen as one of the greatest Frenchmen of all time — expect to see a monument to his memory or at least an important street or place named after him in any French town you visit. He was famously caricatured as being very tall (which he was, being 6'5"/1.96 m), with a big nose, wearing his brigadier-general military uniform with the trademark two-starred kepi and for raising his arms into the air while clenching his fists.

Referenced in the following works: