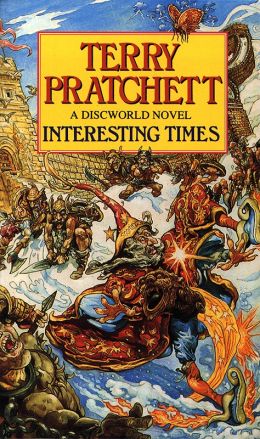 "May you live in interesting times!"
— supposedly a traditional Chinese curse
Advertisement:

Interesting Times is the 17th Discworld novel, and the first since Eric which returns to Rincewind as the central character. However, thematically it's much more a look back at the first two Discworld books, The Colour of Magic and The Light Fantastic, and how much the setting has changed since then.

Rincewind the wizard, peacefully bored at last, finds adventure nipping at his reluctant heels again due to a mysterious albatross received by the Patrician of Ankh-Morpork, asking for the "Great Wizzard" to be sent to the Counterweight Continent - an Expy of the Orient. Strangely enough, while the Continent is well known to be wealthy and cultured, it's also known for extreme violence and overweening control of its citizens. Rincewind is fired off by magic to the unknown land with no idea of where he's going, what he's doing, or indeed which of the many, many people he meets is trying to kill him. Hint Almost everyone. He may be surprised to see some of the familiar faces who've ended up there, though...