Atop a Mountain of Corpses 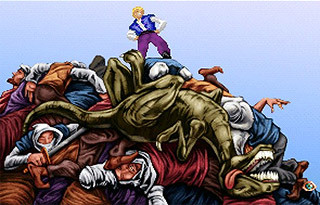 I wonder if he can see his house from there?
"Now those who were living did their best to survive
In that mad world of gut-blood and fire
And for seven long weeks I kept myself alive
While the corpses around me piled higher."
— Eric Bogle (or The Pogues if you prefer), And the Band Played Waltzing Matilda
Advertisement:

So, the hero has just defeated a horde of mooks. So many mooks, in fact, that their corpses have been piling up under the hero's feet and formed a veritable mountain of bodies. What better way to celebrate this badass display than to perform a Victory Pose atop said pile?

Frequently (especially in Film Posters) comes with a Leg Cling by the Love Interest in a Go-Go Enslavement bikini, as the hero waves his BFS / BFG (or Cool Sword) in the air triumphantly.

If it's a villain, you can expect them to instead lounge comfortably on their corpse-couch, perhaps off-handedly stabbing any enemies that have a twitch of life still in them. Bad guys with time on their hands and an interest in arts and crafts may turn this pile-o-corpses into a skull throne, with authentic human skin leather for the lining. *shudder*

The PG-13 version of this has the baddies KO'd or too beat up to move. In which case, the hero will usually sit on top of the still moaning mooks and offhandedly thwack any that show signs of resistance. This is especially common if they're waiting to be rescued.

Potential ways to subvert this trope include using the corpse as cover, or surprise attacking anyone who goes over the corpses while you're on the other side of it. Or in some cases, creatures forming themselves with a pile of corpses.

Compare Nothing but Skulls and Hitler Cam. See also Buried in a Pile of Corpses.

The winner of the ultimate showdown

The winner of the ultimate showdown