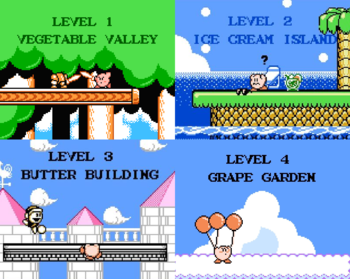 No wonder Kirby eats everything in sight...
"They sound more like a grocery list than kittens."
— Carlotta, Cat Pack: Carlotta's Kittens and the Club of Mysteries
Advertisement:

A rather silly form of Theme Naming is to name characters after food and drinks. This tends to be done in comedic and child-oriented works, because it is very difficult to take someone named "Sausage" seriously. However, such a character may be afforded some dignity by being named after a food in a foreign language; somebody named "Okonomiyaki" sounds rather more impressive to an English speaker than one named "Pizza".

In video games this will also often result in a Level Ate, and the clothes they wear would most likely be an Edible Theme Clothing. Compare A Pig Named "Porkchop", for when an animal is named after their products that are edible.