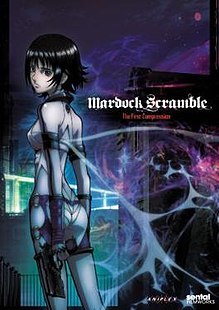 "Why me?"
— Rune Balot
Advertisement:

Rune Balot is a teen prostitute whose life is saved after an attempted murder by being cybernetically enhanced. Partnered with a cyborg mouse who can transform into any tool or weapon, she has to defend her life by putting away the casino owner and October Corporation employee Shell Septimos, the man responsible, using her new abilities to sense her entire environment and control any nearby electronics.

A three volume novel by Tow Ubukata (published by Viz Media's Haikasora label in English as a single omnibus volume). An OVA series was commissioned to be animated by GONZO with character designs by Range Murata, this was later cancelled and instead it was released as a series of three films animated by Go Hands, with a dub + subtitled release

by Sentai Filmworks in America and Canada, Madman Entertainment in Australia and New Zealand, and Kaze in the UK, Ireland and Europe.