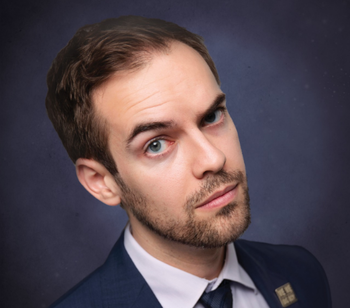 John Patrick "Jack" Douglass (b. June 30, 1988) is an American YouTube personality, comedian, entertainer, and musician who runs the YouTube channel Jacksfilms, which has become the home of several of his series.
Advertisement:

His best-known series used to be a weekly Long Runner called Your Grammar Sucks, where he reads aloud grammatically-painful and typo-laden comments left on YouTube and Facebook. Amongst regular episodes, the series contained specials ranging from songs made entirely out of badly-written comments or skits. The first "season" of YGS ended on November 20th, 2015 with its hundredth episode, a huge hour-long special. Jack has confirmed that Season 2 will not contain any specials.

While YGS was in the later episodes of its first season, Jack started a series called Jackask wherein his fans asks him all sorts of questions. It also infrequently featured him asking his fans questions, which eventually became its own series Yesterday I Asked You, or YIAY. It started on his second channel, but he brought it over to his main channel and has become wildly successful ever since. From Your Grammar Sucks, to Jackask, to YIAY, Audience Participation fuels these kinds of series.

His series are as follows:

, along with his second channel

His (parodic) channel trailer can be watched here

, and a slightly-outdated one can be seen here

Jack has also done acting, namely playing one of the Interns on the web series MyMusic.

. He also made a Spiritual Successor to his YIAY series in the form of a video game adaptation; Be Funny Now!, which can be played on Android

Help - Us - Clean up TV Tropes / If you see a bad, bad edit
take a screencap of it, and send it our way / via Twitter or our Facebook faaanpaaage!