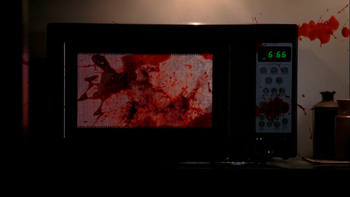 The purpose of a microwave is to heat leftover/frozen dinners up. But what happens if you insert things that's not meant to be edible in there?

Ever heard of the warning: "DO NOT PUT METAL IN THIS OVEN"? That's because it creates sparks and can start a fire. Often times in fictitious works, Hilarity Ensues.

But not so much if the explosion in question injures someone. Even less so if there was a small creature stuffed inside there and tortured to its death...

As mentioned above, may result in Stuff Blowing Up. See subtrope Microwave the Dog for microwaved pets. Obviously, Don't Try This at Home. (Unfortunately, there are those who will and do.)