Manga / You Are Being Summoned, Azazel 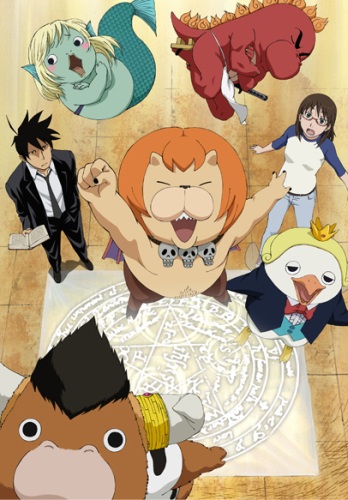 You Are Being Summoned, Azazel (Yondemasuyo, Azazel-san) is a manga by Yasuhisa Kubo which ran from 2007 to 2018 in the Seinen magazine Evening, and a Spring 2011 anime series from studio Production I.G.

Demons do exist. They are powerful, malicious, vindictive and... cute as hell!

The mysterious and knowledgable detective Akutabe and his young, increasingly less naive assistant Rinko Sakuma, make use of their powers to solve cases. Hilarity Ensues.

The anime adaptation of You Are Being Summoned, Azazel is directed by Tsutomu Mizushima (Bludgeoning Angel Dokurochan, Haré+Guu, Kemeko Deluxe!, The Legend of Koizumi... and Big Windup! ). It's like Sgt. Frog, but crazier and with more profanities.

A second season of the anime began airing in Spring 2013 under the name Yondemasuyo, Azazel-san Z.

You Are Being Summoned, Azazel provides examples of:

Example of:
My Life Flashed Before My Eyes