Web Video / Is It a Good Idea to Microwave This? 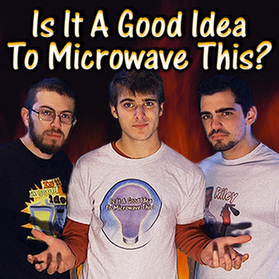 No, no it isn't.
Let's find out! Here at TV Tropes, troping is our number one concern.
Advertisement:

In a nutshell, two (later three) guys decide to put various things into a microwave oven and post their findings on YouTube. Test subjects range from the mundane (like grapes and a bar of soap) to the truly bizarre (like a Pikachu doll, a toilet bowl, and rubber duckies) and even the dangerously stupid (like two iPods, fireworks, smoke bombs, and an airbag - twice).

The show ended its normal run after ten seasons and three hundred experiments in 2011. From that point on, they did one-off episodes either at their usual location on stage in front of a live audience, but those stopped in 2015, although creator and cameraman Jonathan Paula has stated in comments several times a comeback can be possible. You watch the show here.

Compare Will It Blend?