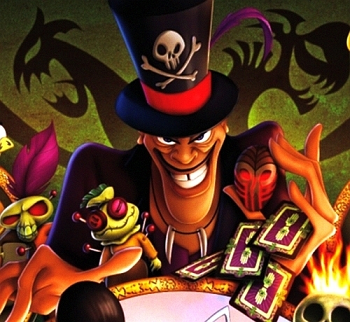 Are you ready?
"Contrary to popular belief, there is nothing inherently sinister about Voodoo. It is a blend of Roman Catholicism and African tradition, practiced mainly in Haiti and Louisiana. Curses, hexes, effigy dolls and potions are more often a part of Obia, an underground form of sorcery that is not connected to Voodoo."
— Dennis Farina describing the difference between Voodoo and Obia in an episode of Unsolved Mysteries
Advertisement:

This is a form of magic in either Caribbean or Louisianan flavors. Many practitioners call themselves priests or priestesses, and they almost always do have magical powers, regardless of whether or not the supernatural exists or is even mentioned elsewhere in The 'Versenote Ironically, Voodoo is more likely to be a hoax in explicitly supernatural settings. Sympathetic Voodoo Dolls (ie, what you do to them appears on the person they represent) are a classic trick, as is making zombies. Other practitioners simply use tarot cards or other divination tools and they always work, even if they have to rewrite reality to do it. Shrunken Heads may also be present.

What you don't see in the depiction of Hollywood Voodoo is anything resembling actual religious practice. The Christian elements of Voodoo are almost never shown, and the animistic elements are heavily stereotyped. It may even be conflated with Hollywood Satanism in some egregious cases. The only deity ever mentioned is the death god Baron Samedi, and since Everybody Hates Hades, he's most often in an antagonist role of some sort. If he himself doesn't appear, male practitioners will dress like him by donning the famous tattered tuxedo, top hat, and skull makeup. Even if he's not a villain, it still leads to the mistaken idea that Vodou is centered around death and necromancy. It doesn't help that the most well-known cases relating to a voodoo priest or priestess are disasters caused or predicted by the priest(ess).

Real Life Vodou is a religion like any other; what Hollywood has is The Theme Park Version of hoodoo

Not to be confused with Voodoo Shark, which is an explanation for a Plot Hole that raises more questions than the hole itself. There's plenty of overlap though, especially if—as mentioned earlier—the setting otherwise lacks any kind of magic.