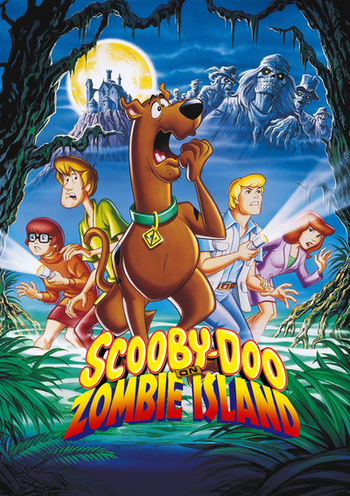 In 1997, the Scooby-Doo franchise seemed to have run its course. It had been 6 years since A Pup Named Scooby-Doo was cancelled, the only sign of life in the franchise being a made-for-TV-movie in 1994 called Scooby-Doo in Arabian Nights in which Scooby barely appeared, and the ever-present reruns of previous series. Then, trailers on VHS tapes of several Warner Bros. family films began to circulate. It had sleek animation, dark colors, and featured a seemingly dark and potentially scary movie, and it featured Scooby-Doo and Shaggy running for their lives.

With a journey into relatively mature writing by Glenn Leopold, Zombie Island marked a high point in the Scooby-Doo franchise and a venture in the opposite direction most Scooby-Doo movies took. Directed by Jim Stenstrum and released on September 22, 1998, the film is animated with a more dark and realistic feel to it, and featured a somewhat cynical/mature look at what happened to Mystery Inc. after their adventures were done, which would be touched on again in The Movie, but with less success. Characters were more fleshed out and three-dimensional, especially the newly empowered Daphne. The pop songs of past cartoons gave way to Alternative and Metal music. The story appealed to older viewers with death as part of the backstory, and the end result for the gang if they didn't win.note  Although the back cover mentioned that they do make it out alive. And there was no contrived story with a guy in a mask, there were real zombies.

The film's success led to the creation of three more direct-to-video movies covering mysteries Scooby and the gang would solve as adults, starting with Scooby-Doo! and the Witch's Ghost. The success of those caused a wholesale revival of the franchise, culminating in a live-action film and the first new TV series in over a decade, What's New, Scooby-Doo?. The Direct-to-Video movies would also continue, even if the animation quality was not often up to the high standards set by Zombie Island.

Production started at Hanna-Barbera, but it was completed by its then-new parent company, Warner Bros. Animation after the buyout. WB has produced all subsequent Scooby-Doo films.

The movie starts with Fred inviting Daphne, Scooby, Shaggy, and Velma to a long-awaited Mystery Inc. reunion, held in honor of Daphne’s birthday. The five of them travel to New Orleans in order to find real monsters to discuss on Daphne's talk show. After effortlessly exposing several creature impostors, the gang accepts an offer to visit Moonscar Island. The island is home to a French chili pepper plantation owner named Simone Lenoir, and has become the site of several disappearances over the years. While there, our heroes grapple with zombies and voodoo, death becomes a real threat, and the adventure grows legitimately dark and scary. It remains one of the darkest and most dramatic installments in the entire franchise, with only the possible exception of Scooby-Doo! Mystery Incorporated and Scooby Apocalypse matching it or coming close.

Zombie Island is also notable for having the first permanent shakeup of the franchise's vocal cast.±  Prior to this, the only main character to have been permanently recast since Where Are You ended in 1970 had been Velma (although A Pup Named Scooby-Doo, being a Spinoff Babies series, necessarily replaced the entire voice cast except for Shaggy and Scooby). Don Messick, Scooby-Doo's long-time voice, retired in 1996 and died in 1997 shortly before recording could begin – the movie is dedicated to his memory; Scooby himself is played by Scott Innes instead. Casey Kasem, who had played Shaggy in every incarnation of the franchise up to this point, declined to reprise his role here after refusing to voice the character in a Burger King commercial (though he would return four years later after he successfully fought for the character to be a vegetarian), so Shaggy is played – for the first and only time – by Billy West±  though Billy did voice the Big Eater one additional time in a Kids' WB! commercial. Daphne and Velma are played here by Mary Kay Bergman and BJ Ward respectively, replacing original VA's Heather North and Nicole Jaffe (also respectively; both original voices would briefly return four years later). Frank Welker, reprising his role of Fred, was the only original cast member to return.

In 2019, a sequel, Scooby-Doo: Return to Zombie Island, was announced

Simone and Lena transform into their cat creature forms.

Simone and Lena transform into their cat creature forms.