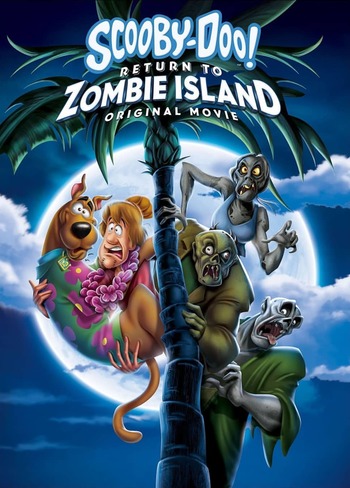 Scooby-Doo: Return to Zombie Island is a 2019 Direct-To-Video animated film, part of the Scooby-Doo Direct-to-Video Film Series. It is a sequel to the highly-popular Scooby-Doo on Zombie Island. It likewise acts as a direct sequel to Scooby-Doo! and the Curse of the 13th Ghost, picking up where that film left off.

Having solved mysteries all over Mississippi, Mystery Inc. has come to a surprising revelation — they have no more mysteries to solve! Thus, the best thing to do is to take a vacation. However, their vacation spot is one they didn't expect to return to - Moonscar Island, the site of their first encounter with real monsters. Even worse, the zombies that infested the island have returned. Now, Mystery Inc. needs to fully solve this haunting caper if they ever want to get back to the mainland alive and in one piece.

This Film Uses The Following Tropes: