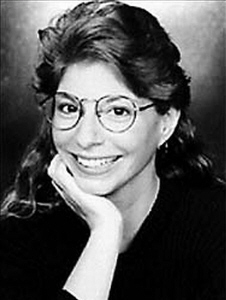 R.I.P. 1961-1999
"My dream is that someday in the future, a kid will be watching some animated flick Mary Kay did, like Scooby-Doo on Zombie Island, Toy Story 2, Batman Subzero, etc. ... and that kid won't even know that they are being entertained by Mary Kay - and yet that kid is in this world because the efforts we do today saved the life of one of their parents. That's the legacy I want for my Mary Kay."
— Dino Andrade
Advertisement:

Mary Kay Bergman (June 5, 1961 – November 11, 1999) was an American voice actress born in Los Angeles. Since making her debut in 1978, Bergman was one of the most prolific voice actresses of The '90s, with an extensive career in voiceovers for commercials, television and film. Her decade-long career saw her involved in some of the decade's most iconic cartoons, including South Park, many of the first few Disney video sequels, and the Scooby-Doo revival DTV films.

Though many new cartoon fans don't remember hearing her voice, there was a period of time when her voice appeared in almost everything. She replaced Meg Ryan as the voice of Dr. Blight during the later seasons of Captain Planet, and appeared in a number of the early 1990s Marvel cartoon adaptations, including Iron Man: The Animated Series, Fantastic Four: The Animated Series and Spider-Man: The Animated Series, the latter as Gwen Stacy. She voiced Ariel's sister Arista in The Little Mermaid animated series, and was Disney's official voice of Snow White throughout the 1990s. She also played some of the iconic redheads of animation, including Barbara Gordon in Batman: Sub-Zero and Daphne in the first three 1990s Scooby Doo films, Zombie Island, Witch's Ghost and Alien Invaders. She could do male voices as well, ranging from Jay Jay the Jet Plane to Timmy Turner on The Fairly OddParents pilot short (Bergman's close friend Tara Strong voiced the character in the series). She also could be heard on South Park, voicing every female character (save for a select few done by series co-creator Trey Parker).

Bergman taught voice acting professionally. Her students included Grey DeLisle and Tara Strong, who both became ubiquitous in American animation, and who both took on roles formerly performed by Bergman.

Out of the public eye, however, Bergman suffered from anxiety and depression, a fact she kept hidden from her family and friends for several years. In the end, on November 11, 1999, at 38 years old, she shot herself in her Los Angeles home. Her husband of nine years, fellow voice actor Dino Andrade, launched SoulGeek

in her honor so that other geeks could find love just as he and Mary Kay found each other.

She was also good friends with Robin Williams, with whom she co-starred in What Dreams May Come. She turned down an offer to perform the Oscar-nominated "Blame Canada" at the ceremonynote She was invited to perform it (and wanted to as Self-Deprecation, since she's mentioned in the song as one of the horrible things about the country), but ended up having to decline on account of pre-existing commitments. so Williams offered to do so after her death to honor her. Williams later committed suicide himself in 2014, partly for the same reasons as Bergman.note While it was ultimately dementia, not depression, that caused his suicide, he did suffer from it as well.

No relation to Jeff Bergman, although the two worked together many times.

The Mary Kay Bergman Memorial site can be found here