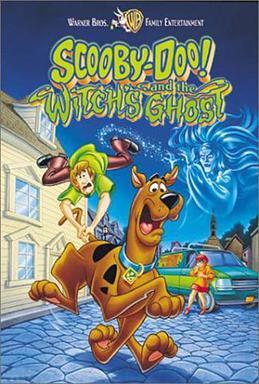 The second direct-to-video film in the Scooby-Doo franchise, Scooby-Doo and the Witch's Ghost was directed by Jim Stenstrum and produced by Warner Bros. Animation with a Hanna-Barbera Cartoons, Inc. copyright. It debuted on October 5, 1999.

Also, as a side note, Scott Innes now voices Shaggy, taking over from Billy West.

The Mystery Inc. gang travel to a New England town called Oakhaven after being invited by horror writer Ben Ravencroft to view the fall color. When they arrive, the gang learn that the ghost of a colonial Wiccan note  there is no actual such thing in Real Life, because Wicca is a modern religion. See Wicca who burned as a witch is terrorizing Ben's hometown, and she happens to be Ben's ancestor. While investigating the mystery, Scooby and the gang meet the local eco-goth rock band, The Hex Girls. With the Hex Girls' help, our heroes eventually find there's more to the mystery than meets the eye...