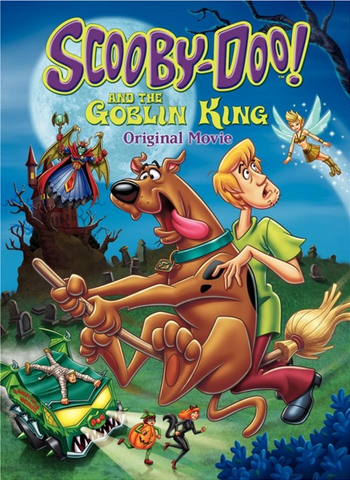 The twelfth Scooby-Doo direct-to-video animated film produced by Warner Bros. Animation, Scooby-Doo and the Goblin King is the first of films produced without William Hanna and Joseph Barbera.
Advertisement:

This movie takes elements from Zombie Island, Witch’s Ghost, Alien Invaders as well as Cyber Chase by having supernatural elements in the story as real. The movie’s significant in showing Shaggy and Scooby as main characters, something not seen since the late 1980s. Though the film is a bit more light-hearted, it’s the fifth as well as the second to last What's New Scooby Doo?-based movie.

It's Halloween night, and the gang has decided to visit a Halloween carnival. However, when a magician, "The Amazing Krudsky", does not allow Scooby into his show, Shaggy and Scooby both decide to expose him as a fraud. After Shaggy and Scooby succeed in ruining his show, Krudsky returns to his dressing room, where a fairy, Princess Willow, inadvertently causes him to discover an entry on the Goblin Scepter in a spell book. She decides to toy with him, but he eventually discovers her, and drains her magic so he can become a real magician.
Shaggy and Scooby, after trick-or-treating all night, persuade the gang to let them hit one more house. When they arrive, they meet Mr. Gibbles, who tells them that the building is actually a genuine magic shop, and that magic exists. However, Princess Willow flies in at that moment, being chased down by Krudsky. He captures her, turns Gibbles into a rabbit and steals all the magical equipment before he leaves. Gibbles then explains to Shaggy and Scooby that the only way for Krudsky to be stopped is for them to enter the world of magic via Grim Reaper Railway and retrieve the Goblin Scepter before Krudsky does. But if they don't make it back before sunrise, then they'll be trapped in the magic world forever.

The film provides examples of the following Tropes: