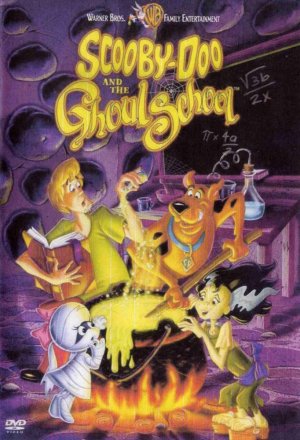 In this entry in the Hanna-Barbera Superstars 10 series, Shaggy's recently been hired as a gym teacher at an all-girls boarding school called "Miss Grimwood's Finishing School for Girls", and brings Scooby and his nephew, Scrappy, along as his assistants. Upon arrival, Shaggy and the Doos discover that while their new workplace may be a girls-only school, it's actually a school for female monsters rather than female humans—in fact, the school's actual name is "Miss Grimwood's Finishing School for Ghouls", not "Girls". The trio's new students consist of:
Advertisement:

However, despite the girls being (literal) monsters, they actually prove to be very friendly and sweet-natured, to the point of where Shaggy and Scooby ultimately warm to them and seem to hardly even notice that their students are monsters. Aside from the girls enrolled at the school, other residents include the headmistress (and possible founder) Miss Grimwood, pet dragon Matches (about the same size as Scrappy), a nameless octopus butler, a floating white hand and Legs (a spider that's roughly the same size as Matches and Scrappy). Miss Grimwood soon commences gym class, with the intent to train the girls for their upcoming volleyball match against the boys of the neighboring Calloway Military Academy (who have always beaten them through cheating).

As if teaching at a school of cute monster girls isn't stressful enough for the cowardly Shaggy and Scooby, the girls' fathers visit during the school's annual Halloween Open House, and while initially friendly to the duo, they warn them against letting any harm come to their daughters as they're leaving. As an additional plot twist, Revolta, the self-styled Witch of the Web, and her minion, the Grim Creeper, plan to kidnap the girls and enslave them, with the help of her spider bats. If she gets hold of the girls, she will make a potion that will make them permanently evil.

Of the films based on the "Scrappy Decade" in the Scooby franchise, this is the most fondly remembered—not so much for our heroes than for the cool monster girls. It was frequently broadcast during the early days of Cartoon Network, often with the other two Superstars 10 installments on Halloween.

Thirty years later, the Grimwood Girls would be featured in a crossover episode of OK K.O.! Let's Be Heroes, with the original voice actresses for Sibella, Elsa and Phanty reprising their roles.

This direct-to-TV movie includes examples of: