Western Animation / Scooby-Doo! and the Legend of the Vampire 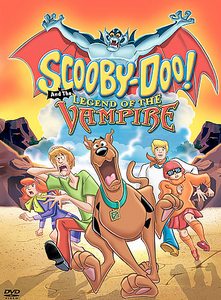 The fifth direct-to-video installment of the Scooby-Doo franchise, Scooby-Doo and the Legend of the Vampire was produced by Warner Bros. Animation (though copyrighted to Hanna-Barbera Cartoons, Inc.; WB Animation had completely absorbed H-B by this time).
Advertisement:

It also reunites Frank Welker, Casey Kasem, Heather North and Nicole Jaffe from The New Scooby-Doo Movies, with the sole exception of Don Messick who passed away five years prior.

We join Scooby and Mystery Inc. as they vacation in the land Down Under where they attend a music festival held at Vampire Rock. Unfortunately, a mystery rises when they learn a legendary Australian creature called the “Yowie Yahoo” is kidnapping musical acts and turning them into vampires. Masquerading as a heavy metal band, the gang must survive a trio of rock-and-roll vampires if they want to crack the mystery surrounding the legend of the vampire.