Western Animation / Scooby-Doo! and the Monster of Mexico 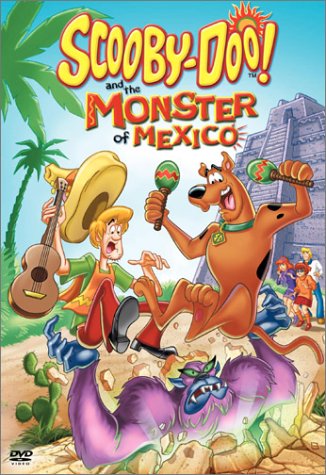 The sixth direct-to-video installment of the Scooby-Doo franchise, Scooby-Doo and the Monster of Mexico was produced by Warner Bros. Animation and again directed by the guy who brought us Scooby-Doo comics, Scott Jeralds.

Once more the film was done in a retro format resembling the classic Hanna-Barbera 1970s cartoons and this movie was the final time featuring Frank Welker, Casey Kasem, Heather North and Nicole Jaffe from The New Scooby-Doo Movies together, as this was North and Jaffe's final time voicing Daphne and Velma respectively. This was also North's final project before her death in 2017.

The movie begins with Fred’s Mexican pen-pal inviting him and the rest of the gang to come visit him in Veracruz, Mexico. Fred’s friend, Alejo Otero, and his family own a hotel and offers to let them all stay while vacationing. The gang decides it’s a good chance to take a break from solving mysteries, only to find there’s a new mystery waiting for them when they arrive in Veracruz. The mythical Mexican monster El Chupacabra is supposedly tormenting the residents of the town and chasing away visitors. Of course, the gang begin investigating around the town to see what they can turn up.