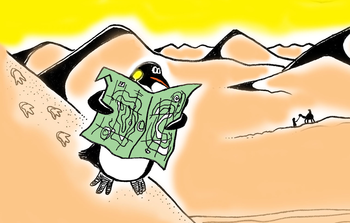 "I knew I should have taken a left turn at Albuquerque."
Celia: Doesn't anyone think it's odd that tropical birds were flying around in this climate?
Haley: Have you ever read an encounter table? Nothing surprises me anymore.
Belkar: I once fought 1d3 dire camels in a swamp. No joke.
— The Order of the Stick, strip #564

Generally, filmmakers use whichever animals they can get for a scene involving wild animals, especially in films set in Darkest Africa or The Amazon Rainforest. Whether the animals are in the right environment, on the right continent or displaying appropriate behaviour is something they just hope we won't ask about. Other times, cultural assumptions can lead to animals being placed in the wrong environments even when technical limitations aren't a strict factor.

This can qualify as a full-fledged biology fail in cases where the animal wouldn't even be able to survive in the environment where it's depicted, never mind being in the wrong place. Fishes are perhaps the most common victims of this, as when freshwater species such as piranha or electric eels are shown living in the ocean, where salinity ought to kill them in minutes. Likewise, for any depiction of saltwater-dependent organisms such as octopuses or great white sharks living and menacing victims in fresh water.

Misidentified wildlife is another feature of this trope. This tends to happen to birds a lot. Some movies show a bird making generic ambient noise type calls, usually via stock footage. This ruins any sense of immersion for birdwatchers, who will immediately ask, "Hey, what's a White-throated Sparrow doing in feudal Japan?" Indeed one will eventually come away with the impression that there are no birdwatchers in Hollywood. (In extreme cases, such as using a red-tailed hawk's scream

to represent an "eagle," this has crossed over into The Coconut Effect.)

Occasionally, a movie or TV show will attempt to justify Misplaced Wildlife by identifying an animal onscreen, such as that White-throated Sparrow, as something ''completely'' different — even if it's a species that looks nothing like the creature onscreen.

Also, sometimes background sound effects contain sounds of animals not native to the setting of the film/TV show. Perhaps the most notorious example is Jungles Sound Like Kookaburras, the use of the distinctive "laugh

" of the Australian kookaburra in jungle scenes set in Africa, or anywhere else other than Australia, usually used for the sound of any monkey. This began with MGM's early-30s jungle movies like Tarzan, the Ape Man, and ever since, everybody has used this sound as jungle background.

Naturally, this trope occurs much less often when the filming actually takes place in the area where the story is set. Also, this trope generally applies only to normal animals. Funny Animals can be easily called as immigrants of some sort if found out of their element (especially if they're able to build vehicles). A few cases might be explained by Creator Provincialism, as the creators incorporate the animals they're most familiar with.

Note that this trope can also occur with plant life. In fact, it occurs often enough that Misplaced Vegetation is its own Sister Trope.

Justified. When Moon points out that skunks aren't native to Alaska, Wolf explains that they filmed a Noah's Ark movie a while back and some of the skunks brought for the shoot got loose and mated like crazy.

Justified. When Moon points out that skunks aren't native to Alaska, Wolf explains that they filmed a Noah's Ark movie a while back and some of the skunks brought for the shoot got loose and mated like crazy.