Film / The Ghost and the Darkness 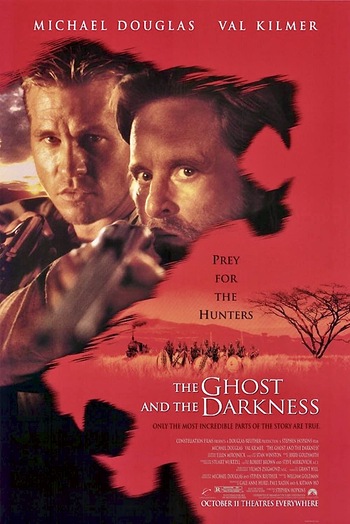 He even got featured in front of the main character.
"They are not lions, they are the Ghost and the Darkness."
— Samuel
Advertisement:

The Ghost and the Darkness is a 1996 American adventure thriller film directed by Stephen Hopkins, starring Val Kilmer and Michael Douglas.

It's a very loose re-telling of the story of John Henry Patterson (Kilmer), a British-Irish Lieutenant Colonel and Military Engineer who was assigned to supervise the construction of the Uganda Railroad in Tsavo, Kenya in 1898. This mission seems easy enough at first, but is soon complicated by the appearance of two relentless anthropophagous lions, the "Ghost" and the "Darkness," who manage to infiltrate every part of the construction camp whenever they please to hunt the workers. This naturally spreads panic among the men and makes the threat of rebellion likely, leaving Patterson, with only the help of his African assistant Samuel (John Kani) and the American hunter Charles Remington (Douglas), to face the lions and save the railroad project before it is too late.

The film provides example of: