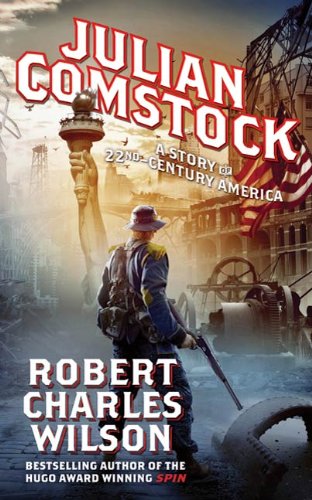 Julian Comstock: A Story of 22nd-Century America is a Steampunk science-fiction novel by Robert Charles Wilson. Set in a future where the oil has long since run out, America has become a feudalistic theocracy, and 19th-century social norms have been revived, this novel tells the life story of the title character.

Julian Comstock, nephew of President Deklan Comstock, has been sent out west for his own safety, since the President has executed the boy's father and has hostile intentions toward Julian himself. Julian's life with his friend Adam Hazzard and his teacher Sam Godwin is quite idyllic — until the three are drafted into a war against "Mitteleuropa," a Dutch-German alliance seeking to control the northern waterways of what was once Canada...

See also Fitzpatrick's War for a similar premise, albeit with a more deconstructive bent.