The Mountains of Illinois 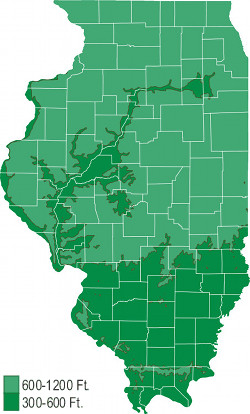 Movies and TV shows, wherever they're supposed to be set, tend to be filmed in Southern California or British Columbia, at least when made by US or Canadian production companies. This leads to a common error where mountains show up in the background of settings which have no visible peaks in Real Life.

The trope was named for the US state of Illinois, which, if you haven't already realized it, is almost as flat as this joke. For instance, there are two buildings in Chicagonote  The Willis (formerly Sears) Tower at 1451 ft, and the Trump International Tower, at 1389 feet) that are taller than the state's highest natural pointnote Charles Mound in the Driftless area of Jo Daviess County in the northwest corner of the state, at 1236 feet., and as many as 40 buildings in the city that top out at a higher total altitude, since Chi-Town already sits at about 600 feet above sea level. For those reading from Europe, Denmark is a suitable substitute.note A country whose highest point is 171 metres/561 feet above sea level, and the average elevation is only 31 metres above sea level. British readers: think East Anglia. note Norfolk and Cambridgeshire are not famed for their spectacular hills either.

This becomes Artistic License – Geography. Say a writer from California wants to base a story in Flyover Country. Even if they themselves visited Illinois and know what it looks like (and this is hardly guaranteed), they might still hope the viewers won't know the difference. Obviously, it can be a sore point for people who actually live there.

A subtrope of Television Geography. See also Misplaced Vegetation. While examples of this trope need not actually take place in Illinois or the Midwestern United States, they must indeed involve mountains or hills appearing where they should not be. Inversions — when mountains don't appear where they should — are okay, but all non-mountain-related tropes belong on Television Geography.

Often a result of California Doubling.

After your tour of our beautiful non-existent mountains, why not take in the fiery splendor of The Lava Caves of New York?