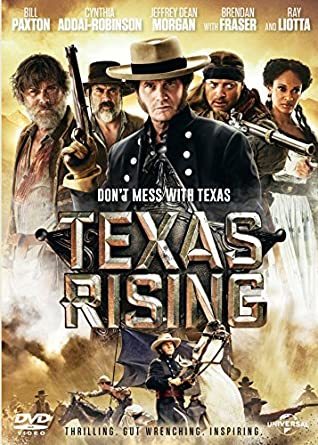 "1836- Republic Of Texas. The Mexican Territory is home to thousands of US settlers. Tensions rise as Comanche and Karankawa fight to keep their lands. Outlaws roam free, and slaves are caught in the crossfire. Mexican General Santa Anna battles to reclaim the land. US President Andrew Jackson is hesitant to intervene and Texas has no choice but to declare itself an independent nation. Outnumbered, General Sam Houston's Texas Republic Army and Steve Austin's Ranging Company are all that stand between Santa Anna's tyranny and independence. Texas in flames; The Alamo in ashes. Pioneers, Mexicans, Tejanos, Indians, Soldiers, have no choice... Fight or die!"
—Opening Narration
Advertisement:

Texas Rising is a 2015 The History Channel TV Miniseries set at the end of the Alamo and focuses on Sam Houston (Bill Paxton) and the Texan army. The series also focuses on the creation of the Texas Rangers and it also deals with historical events like the Goliad Massacre and the Battle of San Jacinto. Other characters include Santa Anna (Olivier Martinez), Deaf Smith (Jeffrey Dean Morgan), Emily D. West (Cynthia Addai-Robinson), Moseley Baker (Crispin Glover), among many others.

Tropes of this series include: