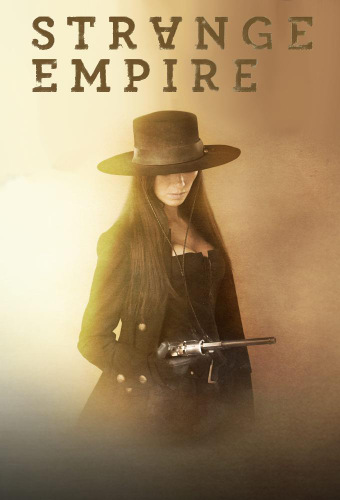 Strange Empire (stylized as STR∀NGE EMPIRE) was a Western drama on CBC in 2014 created by Laurie Finstad-Knizhnik. The show, located on the Alberta-Montana border in 1869, centers in particular around three women: Kat Loving, a Métis woman with four adopted children, Rebecca Blithley, an autisticnote this is not explicitly stated in the show, being as it's the 1800s, but the writers have confirmed that she is on the spectrum. woman who is learning to become a doctor from her husband, and Isabelle Slotter, the woman who runs Janestown and its prostitutes with her husband, Captain John Slotter (pronounced "Slaughter").

After most of the men of Kat and Rebecca's traveling group are murdered by supposed "Indians," the women and surviving men are taken in by the Slotters, though their grace and understanding doesn't last long. The show does not tend to follow a formulaic structure, but fully expect at least one scene of Kat showing up at the last minute when someone is imminent danger (especially if her kids are involved) but killing no one and at least one scene of Slotter and his men wrecking the town and terrorizing the women per episode.