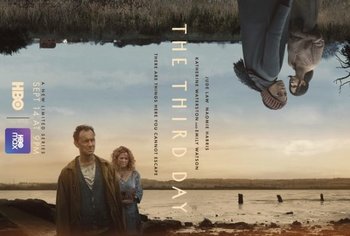 Airing on HBO and Sky Atlantic in fall 2020, The Third Day is a Folk Horror Mini Series created by Dennis Kelly and Felix Barrett, set on the small island of Osea off England. It is split into three parts, "Summer", "Autumn", and "Winter".

The first part (Summer, directed by Marc Munden) follows Sam (Jude Law) after he saves a young girl from hanging herself. Reminded by memories of his son's gruesome murder, Sam takes her back to her home island, Osea. He is immediately taken in by villagers (Emily Watson and Paddy Considine) and has a brief fling with an American woman Jess (Katherine Waterston) as he learns what the island really wants from him.

The second part (Autumn, directed by Munden and Barrett) is a twelve-hour presentation that was live-streamed on Facebook on October 3, 2020. Shot in one continuous take (although with time compressed), it depicts the entirety of Osea's festival and various local rituals.

The third part (Winter, directed by Phillipa Lowthorpe) follows Helen (Naomie Harris), a Struggling Single Mother who goes to Osea in winter with her daughters several years later to unravel a mystery.