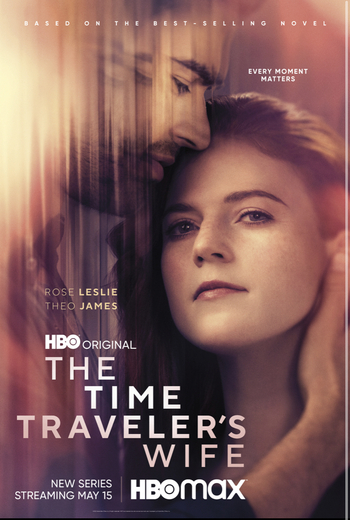 The Time Traveler's Wife is a miniseries based on the novel of the same name that debuted on May 15, 2022 on HBO. The show is the second adaptation of the novel, following the 2009 film adaptation, and was developed/written by Steven Moffat, directed by David Nutter, and stars Theo James, Rose Leslie, Kate Siegel, and Desmin Borges.
Advertisement:

Henry de Tamble (James) has a unique disability. He is a time traveler, which has been a horrible burden that he’s been afflicted with since he was 8. Very frequently, he disappears from wherever and whenever he is and appears in another time and place with nothing in the way of tools or clothes on his person, and he has had to learn to survive by running, fighting and stealing. The only other people he knows with his disorder are himself along with future or past versions of himself that he frequently runs into.

Henry's life changes when he meets a young woman named Clare Abshire (Leslie) who knows him well and claims to be his future wife. Since she was 6, Clare has had run-ins with Henry at different ages, and has become close to him over 14 years, learning he’ll be her husband in the future. When she finally meets a version of him that has never met her, she’s upset to learn he’s not yet the man she fell in love with.

On July 1, 2022, it was announced that the series had been cancelled after one season.