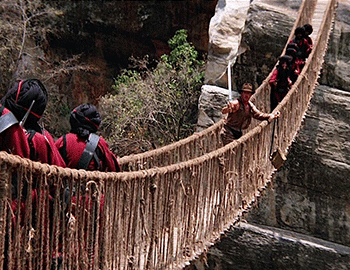 "Oh right, what Daring Do adventure would be complete without the precarious rope bridge?"
— Quibble Pants, My Little Pony: Friendship Is Magic, "Stranger Than Fan Fiction"
Advertisement:

Any foot-based Chase Scene in the outdoors inevitably comes to a broad and incredibly deep chasm spanned only by a rickety rope-and-plank bridge. Naturally, the ropes on one end must be cut (or break due to their age) when the hero(es) are half-way across, so that they must hold on for dear life as the bridge swings down and slams into the side of a cliff. Never mind the predictable results of slamming into the cliff that fast.

Then, they have to climb back up...

A related trope is when the heroes make it across safely, but have to cut the ropes themselves to prevent their pursuers following them.

In other cases the rope bridge is an obstacle in itself. Many a band of brave adventurers find themselves walking one by one across the rickety bridge. Often a single plank will fall out from under the hero (or a Red Shirt) leaving them either hanging from the ropes or plummeting to their doom.

It's interesting in the field of Bamboo Technology that they can build elaborate death traps that work for a thousand years, but can't build a rope bridge that will last for ten. Who knows, maybe it's the water or the sea air. Often goes hand-in-hand with Don't Look Down if the bridge is especially precarious.

In ice-bound regions, a snow bridge works on the same principle.

Why Couldn't You Save Me?!

Unable to prevent the tragic transformation of his friend, Harvey Dent, into the criminal Two-Face, Batman's nightmares torment him with the first time he wasn't able to save those he cared about.

Example of:
My Greatest Failure

Why Couldn't You Save Me?!

Unable to prevent the tragic transformation of his friend, Harvey Dent, into the criminal Two-Face, Batman's nightmares torment him with the first time he wasn't able to save those he cared about.