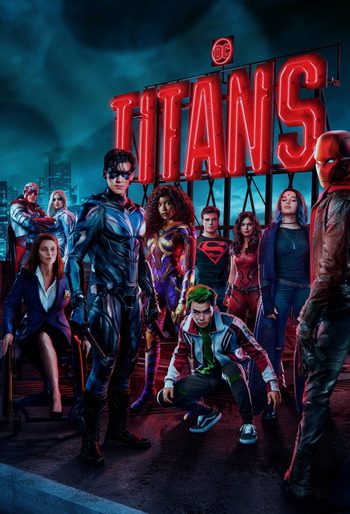 "There are no sidekicks in Titans. We're partners. We have each other's backs." note From left to right: Hawk and Dove, Barbara Gordon, Nightwing, Starfire, Beast Boy, Superboy, Wonder Girl, Raven, and Red Hood.
Rose: What the hell is this place, anyway?
Dick: This is a place where people like you can learn how to be the best version of who you are.
Advertisement:

Titans is a live-action superhero series, based on the DC Comics team Teen Titans.

Titans follows Dick Grayson (Brenton Thwaites), the former sidekick of Bruce Wayne / Batman (Iain Glen, season two onwards) who was once known as Robin. After leaving Gotham to make a name for himself outside of Bruce's shadow, he encounters a group of fellow super-powered individuals and forms a new lineup of Titans, the team of young heroes he used to be a member of. Among them are Rachel Roth (Teagan Croft), a troubled teenager who harbors a dark, demonic power; Kory Anders (Anna Diop), an alien from the planet Tamaran; and Gar Logan (Ryan Potter), a metahuman who has the ability to transform into animals.

The first season focuses on the Titans getting to know each other while facing the Organization, which seeks to bring forth the demon Trigon, Rachel's birth father, to Earth. They're later joined by the surviving members of the old Titans: Hank Hall (Alan Ritchson), Dawn Granger (Minka Kelly), and Donna Troy (Conor Leslie), as well as Jason Todd (Curran Walters), the new Robin, sent by Bruce to assist Dick.

The second season sees Dick and the rebuilt Titans fighting their archnemesis, Slade Wilson (Esai Morales), who returns when his daughter, Rose (Chelsea Zhang), gets tied up with them. The Titans also find themselves pit against Cadmus Laboratories after they provide shelter to Conner (Joshua Orpin), a clone of Superman created by them. While the first season does not have a permanent setting, the Titans set shop at the old Titans Tower in San Francisco for the second season.

The third season, a loose adaptation of A Death in the Family and Under the Red Hood, moves the setting to Gotham. Jason, after having been presumed dead, resurfaces as a terrorist known as the Red Hood, who vows to become Gotham's dictator by consolidating all criminal elements. With the departure of Batman, the Titans must deal with threats posed by Jason and Scarecrow (Vincent Kartheiser), who is in league with him. Along the way, they have to navigate the whims of the Gotham City Police Department, headed by Commissioner Barbara Gordon (Savannah Welch). The Titans also welcome a new member: Blackfire (Damaris Lewis), Kory's uncontrollable younger sister.

Produced by Geoff Johns, Greg Berlanti, Akiva Goldsman, and Sarah Schechter, Titans was created for the DC Universe streaming service after previously being in development at TNT since 2014. The series premiered on DC Universe in the United States on October 12, 2018, with Netflix handling international distribution. After a WarnerMedia restructuring transformed DC Universe into a digital comics reader, the show moved to HBO Max beginning with its third season and started streaming new episodes for the service on August 12, 2021. Ahead of the third season premiere, TNT (its aforementioned original home) also began airing the first season on July 12 of that year. A fourth season has also been confirmed.

As of Crisis on Infinite Earths, Titans is represented in the Arrowverse multiverse as Earth-9. The fourth episode of series introduced the superhero group Doom Patrol, which later got their own series. Despite initial statements and the Doom Patrol cast reprising their roles in the spin-off, the two series are not set in the same universe. note Doom Patrol is officially Earth-21