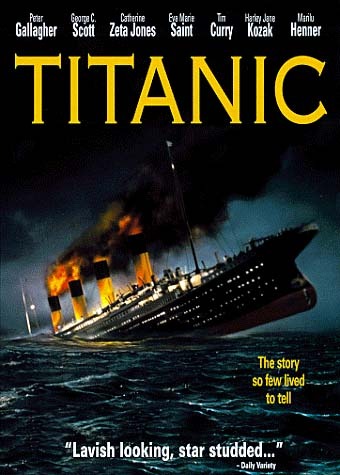 Even the poster is wrong.* No, the Titanic did not go down in flames.
Advertisement:

Rather than having a central love story, the film follows three subplots:

The production was rushed to capitalize on the hype for the upcoming Cameron movie, and is littered with inaccuracies. It also features one of the most random rape scenes in television history.

Despite being released a year before the Cameron film, there are numerous similarities between the two. In particular, the lead character is a young man from Third Class with the initial "J", who boards with a ticket that didn't originally belong to him,note Jamie steals his ticket from a passenger whereas Jack won his at poker. falls in love with another passenger and uses someone else's tuxedo to mingle in First Class, where he meets John Jacob Astor.

See also Hitler: The Rise of Evil, another Canadian miniseries that aired on CBS which was rife with historical inaccuracies.