Hiding in a Hijab 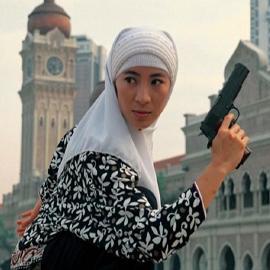 Michelle Yeoh in Super Cop, using a hijab to pose as a local during the Malaysian stake-out.
Advertisement:

Ah, the hijab, and its close cousins the niqab and the burqa; these articles of clothing are most associated with Muslim women for religious modesty. They also have the distinctive properties of being 1. Extremely common in certain locations and 2. Face-concealing. This means that if you as a fictional character are on the lam in Qurac, running through the ubiquitous out-door marketplaces in an attempt to dodge your pursuers by leaping over apple-carts, you have a perfect means of evading capture: Simply don one of those big, black outfits the women are wearing, and vanish right into the crowd.

Just how you're supposed to come by one of these is not important. How you find one in your size is even less so. The important thing is that you can hide your face without drawing the kind of attention a mask or hood would bring down on you, and make yourself harder to find than Where's Waldo?. Often overlaps with Disguised in Drag when done by a male character, where it's even more likely to be Played for Laughs than usual. Mysterious Veil may or may not include the full hijab but serves much the same purpose. A nun's habit can fulfill a similar purpose in western settings. Contrast with Bedlah Babe, the other stereotypical clothing for Middle-Eastern women which is anything but modest.