Series / Hitler: The Rise of Evil 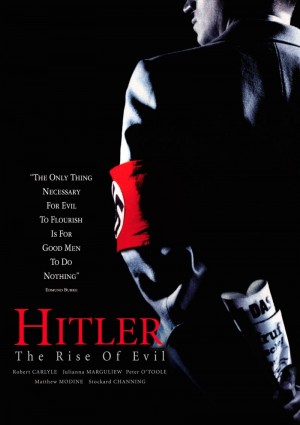 "The only thing necessary for evil to flourish is for good men to do nothing."
— Journalist Fritz Gerlich, paraphrasing an old quote
Advertisement:

Hitler: The Rise of Evil is a 2003 Canadian, two-part Mini Series covering the rise of Adolf Hitler and Nazi Germany. Starring Robert Carlyle in the title role, the series shows how Hitler went from a lowly corporal in the German Army to Führer of Germany. Though an ambitious project, the series suffers from several historical inaccuracies.

See also the miniseries Titanic (1996), another Canadian-produced two-parter which has painful historical inaccuracies and also aired on CBS.