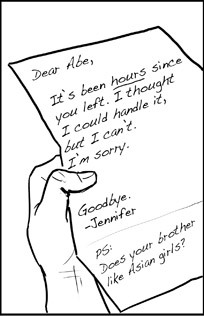 I left a note in the hallway
By the time you read it I'll be far away
— Beyoncé, "Sorry"
Advertisement:

I find it hard to write this letter, but I have to tell you the truth.

We never would have expected this day to come. Ever since we were separated from each other, our letters were the only way we could stay in touch. We promised one another that no matter what, despite our Feuding Families, despite you being called to the front, we will one day be together, either Happily Married or Together in Death.

I write to tell you that everything that was between us is over. We're finished.

I cannot stand life in separation anymore. I simply can't love you anymore, and I have found someone else. Enclosed you will find the ring you gave me.

Don't grieve — you are neither the first nor the last to get such a letter. Traditions of sending soldiers such letters date back to World War II or even World War I, which would make it Older Than Television.

Good bye, my former love. You will never see me again.

P.S.: See also Wikipedia, they have an article linked here.

P.S.S: Do also compare this to Dumped via Text Message, which is a far less formal breakup method.

"All I get is a letter? You could've at least looked me in my one eye when you ripped out my heart!"

"All I get is a letter? You could've at least looked me in my one eye when you ripped out my heart!"