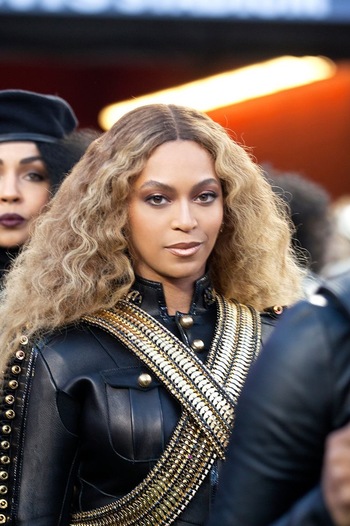 "Okay, ladies! Now let's get in Formation!"
Influences:
Influenced:
Beyoncé Giselle Knowles-Carter (born September 4, 1981), better known as Beyoncé, is an R&B singer, actress, and model. She started off in the girl group Destiny's Child, and soon became the Face of the Band.
Advertisement:

In 2002, she started a solo career (mostly collaborations with rappers but without the other girls), and got her first big hit a year later, "Crazy in Love". Since then, almost every song she's sung has made it to the top of the charts. "Crazy in Love" featured Jay-Z, who would later become her husband and the father of her three children. The two of them, Beyonce in particular, are notorious about keeping their private lives private, which would later prove to be something they strategically subvert in order to clear the air/dispell rumors about them, often with the brutal truth.

She fronted the 2013 Super Bowl halftime show with a reunited Destiny's Child and in 2016, she and Bruno Mars basically stole the halftime show from Coldplay. This appearance, much like a lot of what Beyonce does in some circles, kicked up a lot of controversy due to her styling herself and her back up dancers like members of the militant, pro-black civil rights era political group, The Black Panther Party. She also had the honor of performing the national anthem at President Barack Obama's second inauguration in 2013. In the near future she is predicted to become Empress of Earth.

In 2013, she released a Self-Titled Album that heavily featured a Southern Rap sound and a video accompanying every song with zero promotion whatsoever, a nearly unprecedented move that caused the media and internet alike to collectively piss itself. Two years later on April 23, 2016, she dropped her sixth album Lemonade, an album that further cemented Beyonce's genre mixing, featuring Louisiana bounce beats, an outright rock song featuring Jack White, and even a country song. In the complete opposite way of her previous album, Beyonce promoted the album's release with a short film that premiered on HBO, giving only a week's notice ahead. Lemonade details Beyonce coping with her husband's infidelity, forgiving him, while also promoting womanist ideas and concepts. The world once again lost its mind at the revelations. And in 2018, Beyonce had the honor of being the first female black headliner at the Coachella musical festival, and her nearly 2 hour set of almost continuous singing and dancing was instantly named a classic, with fans and commentators alike dubbing that year "Beychella." In April 2019, a Concert Film entitled Homecoming of this performance was released as a Netflix original along with the audio as a standalone album. It’s part of a three project deal she signed with the company.

At almost any given time she is probably Tumblr's resident Memetic Badass, and she's certainly one of the biggest pop-culture feminist icons of her time.

Got me so crazy in tropes: