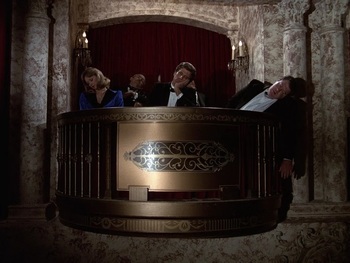 At the Opera Tonight
"I've got Kim Kardashian in my bed backstage. When's the last time your music got anybody laid?"
— Justin Bieber (to Ludwig van Beethoven), Epic Rap Battles of History
Advertisement:

Classical Music — and other forms of "high" culture — are frequently shown as being incredibly dull. Apparently, everyone who enjoys it is really just incredibly pretentious and is just pretending to enjoy it. The honest, working-class heroes like rock and roll or kickin' country music... and typically the stuffy classical fans wind up dancing to it by the end as well.

There's some class consciousness embedded in this: lower-class tastes are more "honest" and genuine, while upper-class tastes are false and pretentious. There are sometimes gender issues involved as well since it's often guys who find classical music dull. It also gets used as a young vs. old signifier, with kids loving loud rock while their elders prefer classical (even though most 70-year-olds nowadays probably grew up on first-wave rock and roll).

Before the advent of rock and roll in the 1950s, this trope used jazz and swing as the populist counterparts to "stuffy" classical music thereby making it at least Older Than Television. As Time Marches On, jazz itself has begun to get this treatment (especially old-time jazz and swing), as it becomes associated with older generations and with conservatism. It doesn't help that a lot of vintage enthusiasts lump traditional jazz and swing with classical music, enforcing this trope. First wave rock and roll itself sometimes gets a small degree of this treatment, seen as slow and outdated, while, like with jazz and classical, its (often older) fans opine that it's "real music".

This trope is probably tied to historical reasons. Before the advent of recording technology, there were only two kinds of music - "folk" music (which was essentially the music of the masses) and "organized" music, which is now termed as "classical". The latter necessitated the use of high-value materials and expensive venues, inviting an audience of only a cultured few - to top that off, most people in those days moneyed enough to afford musical lessons were of the upper class (the middle class was less common back then). Recordings allowed "popular" music to evolve - which is essentially a modified form of folk music - and became a way for music to be accessible to a much wider audience. In a way, Popular music could be seen as a rebellion against the more "exclusive" Classical music.

Related to True Art Is Boring and/or True Art Is Incomprehensible. Contrast Orchestral Bombing. Can sometimes transpire when characters are At the Opera Tonight. Of course, this can anger real-life fans of Classical Music, who consider it to be a Shallow Parody.

Compare and contrast Rock Me, Amadeus!, when melodies from the classical repertoire are quoted in songs from other genres. Polar opposite of Classical Music Is Cool.