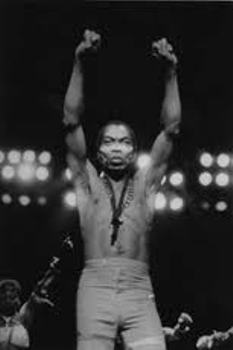 Fela Anikulapo Kuti (15 October 1938 – 2 August 1997) was a Nigerian singer, saxophonist, dancer and activist, famous for creating the musical genre Afrobeat, a cross between African traditional music, Jazz and Funk. He wrote and performed several songs attacking political and social conventions in his native country and African society in general. Needless to say, he was arrested and beaten up for this several times during his career. He died in 1997 from complications from AIDS.

In 2008 the stage musical Fela! was made about his life and in 2014 a documentary, "Finding Fela" was released in theatres.