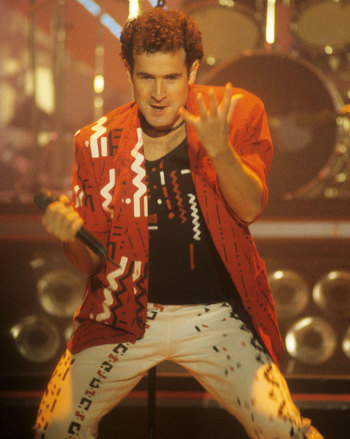 "Hold me close, Africa
Don't let me go, Africa
Let me grow old, Africa
Remember me"
—"Orphans of the Empire"
"African music, wherever you're from
You'll never lose it — the rhythm is strong"
—"Umbaqanga Music"
Advertisement:

Johnny Clegg (June 7, 1953 - July 16, 2019) was an English-South African musician. He was the leader of two now-disbanded bands, "Juluka", meaning "sweat", and "Savuka", meaning "we have risen" or "we are victorious". He later continued touring with a different band, which was either nameless or simply named "The Johnny Clegg Band". His music is an unparalleled type of Western pop/rock combined with traditional Zulu music. While never achieving high popularity in the US, his music was considered controversial in Apartheid South Africa, and is well-liked in South Africa today. He also has a huge following in France, of all places, where he is known as Le Zoulou Blanc (The White Zulu).

His studio album discography with the three bands is as follows:

His music and other works provide examples of: