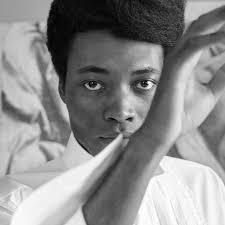 "Before I was born there was a storm
Before that storm there was fire
Burning everywhere
And everything became nothing again
And then out of nothing
Out of absolutely nothing I, Benjamin, I was born
So that when I become someone one day
I will always remember that I came from nothing"
— "Condolence"
Advertisement:

Having been homeless for several years, he started playing cover music in the Paris subway, mostly to make money to survive. He reached a certain level of fame doing this - accordingly, there exist several videos of him from this time, filmed by passengers and passerby (like this one

). He eventually got picked up, got a record label deal and released two extended plays, Cornerstone and Glorious You, and his full-length debut album, At Least For Now. The latter won him the prestigious Mercury Music Award in the year 2015. He has since released a sophomore album, I Tell a Fly, and appeared on the song Hallelujah Money on Gorillaz' album Humanz, both in 2017. In 2019, he was made a "Chevalier de l’Ordre des Arts et des Lettres" (Knight of the Order of Arts and Letters) by the French government, a distinction that rewards cultural contributions to the country.

He was incidentally featured in Denis Villeneuve’s Dune (2021), as the Herald of Change sent by the Emperor.

The music of Benjamin Clementine features examples of the following tropes: