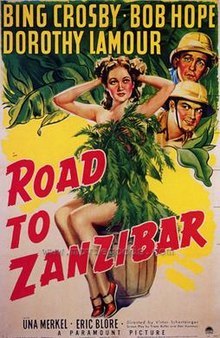 Road to Zanzibar is a 1941 film directed by Victor Schertzinger, starring Bing Crosby, Bob Hope, and Dorothy Lamour. It is the second film in the Road to ... series.

Crosby and Hope play a pair of con-men, Chuck Reardon and "Fearless" Frazier, who get into a series of misadventures in Darkest Africa while trying to raise the money to buy passage back to civilization.