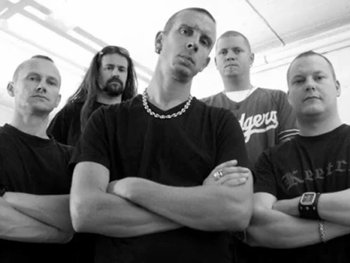 Speak the truth don't you dare lie to me,
I've seen it all before the way you disagree,
The way you always attack all the thing that you say,
The way you turn your back and then you walk away,
Shut your mouth and open up your eyes,
You better take your time and try to realize,
That no one's free from sin and when I look at you,
I scream within WHAT IS WRONG WITH YOU!
"The Truth"

A Rap Metal band that specialize in inverting Getting Crap Past the Radar: A lot of attitude and bad language to cover the fact that pretty much all of their lyrics are heavy on morality and philosophy - under the veneer of offensiveness, the whole thing is very wholesome and politically correct.

Of course, this made the message even more offensive in the ears of conservatives, racists, sexists, et cetera.

Some of their lyrics feature a Villain Protagonist - when you think of it, it becomes obvious that the literal message is simply a Strawman Political for something the band dislikes, and that the real message is the exact opposite.

Tropes, tell me the tropes! The tropes, motherfucker!