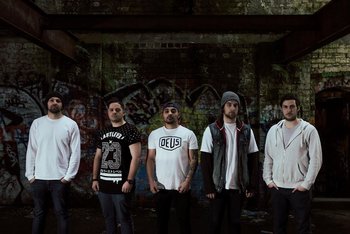 Left to right: Andrew, Adrian (left the band), Matthew Youkhana, Alessandro (left the band too), Matthew Nekic
DVSR are a rap-djent-nu-metal (-core) band from Sydney, Australia, formed in 2013. They initially started off under the name "Devastator" with their debut single "Unconscious". The band's name later was changed to DVSR in order to avoid confusion with some other bands which already had the same name while searching online. DVSR are noted for their unusual mixture of djent, fast-flow rap and metalcore and are often praised as "a better version of Hacktivist" for more complex song structures and wider range of lyrical themes which are not limited to political issues and blessing own coolness.
Advertisement: